On July 17, 2020, at approximately 20:20 hours, units from the Coweta County Fire Department were dispatched to the area of the NCG movie theatre, located in Sharpsburg, Ga., which would shortly thereafter, turn into an in-depth technical rescue requiring multiple units and manpower to the scene. Upon initial units arriving, it was found that a passenger vehicle had left the parking lot at a high rate of speed and plummeted approximately 100 ft. down an embankment into a retention pond where it had become partially submerged in water with two occupants entrapped inside of the vehicle. A plan was put together and executed to gain accessibility to the vehicle via removing multiple trees for both access and egress of personnel.

A rope system was utilized to assist personnel down into the retention area with equipment to extricate both occupants. This required fire department members to wear PFD’s (personal floatation devices) to perform stabilization and auto extrication on the vehicle. Personnel worked hand in hand to remove the occupants, provide medical treatment, patient packaging and stabilization, as both occupants were secured into stokes baskets and hauled out of the ravine using the rope system that was in place, while being hindered by extreme temperatures, this date nearing 100 degrees. Both occupants were noted as having multiple system trauma and were both flown to an Atlanta trauma center utilizing two air ambulances that were requested and stood by on the scene while rescue efforts were underway.

This effort was successful, requiring multiple companies coming together and working as a team where countless hours of training would be put through a test on that evening. 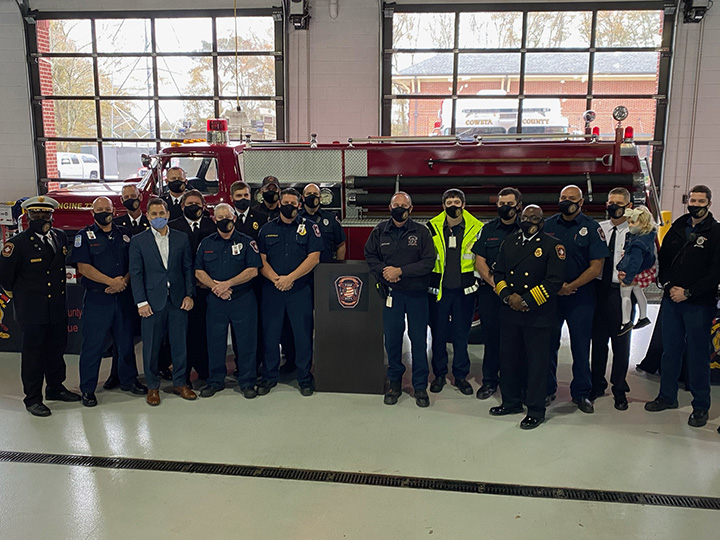