In the pre-dawn hours of March 18th, two area Fire Chiefs’ phones rang one after the other. Joseph Barasoain, then Director of Fulton County Emergency Services, was calling to make a desperate plea for help from two trusted Chiefs and friends who had worked by his side during various disasters in Georgia. But, the disaster Barasoain was calling about was frighteningly different this time, and, it was not unexpected. There was no hurricane damage to sort out, no destruction from tornadoes or havoc from ice and snow.
Barasoain’s request was for Palmetto Fire Chief Henry Argo and Chattahoochee Hills Fire Chief Greg Brett to create within 24 hours a plan to manage a biological “hot zone” for Georgia’s first COVID-19 specimen collection site. Unlike hurricanes or other natural disasters, the threat to human life would remain day after day as hundreds would be compelled to seek diagnosis. Where to start such a daunting and unknown task?
Argo and Brett offered many ideas before the conference call with Barasoain ended. When they hung up, the Chiefs began packing equipment and other resources for this very unique mission. Two hours later the three stood together at Fulton’s Charlie Brown Airport to survey what would become one of the first COVID-19 test site in the state of Georgia.
Walking around and through the County facility, Argo and Brett discussed application of the National Incident Management System (NIMS) both were accustomed to using. But, this so-called disaster would require several procedural adaptations. Hot, warm, and cold zones would be critical to prevent cross-contamination of health workers, clinicians, management personnel and, of course, sick, and healthy people being tested. Law enforcement was needed to manage long lines of traffic and site security. A vast inventory of PPE, supplies, and a means for transporting supplies and feeding workers was of paramount concern. The operation of a biological hazard (incident) site would be a new multifaceted “machine,” and it had to be invented quickly.
Argo and Brett sketched plans and made requests of Barasoain, then all three set to work. Phone calls were made, protocols drafted, rooms marked, barriers established, one checklist after another was created. Later, as others arrived and tents, supplies, PPE, and equipment were put into place, the site began to take shape. Twelve hours after that early-morning phone call, a full-scale “incident action plan” was ready and everything in place. Georgia’s first public drive-through COVID-19 testing site was set to “go live” the next morning at 9:00 AM.
“Wrinkles” of many sorts would occur over the remainder of that first week. More than once severe thunderstorms forced a temporary halt to operations as dangerous lightning and wind threatened workers at the various outdoor stations. A shortage of medical and health services personnel continuously stressed operations and plans for each following day. And sick and frightened people driven to understand their personal risks as this killer virus seemed to sweep around the globe–well, those people were … sick and frightened, and not always easy to manage or console.
For over a week Argo and Brett persevered with a team that slowly refined every function at the site. The two Chiefs offered patience, direction, creative problem-solving, trust and humor as they encouraged their stressed team daily through long hours at the testing site that came to be known as “SPOC 1.”
Soon, reinforcements from GEMA’s All-Hazards Incident Management Team arrived. Then, Chief Argo and Chief Brett went home. Over the next few weeks, they would reflect very solemnly on the high degree of risk involved with this dangerous virus. The gravity of their initial efforts and an unknown future with COVID-19 weighed on them as they worked to meet escalating demands on their own EMS and fire personnel in Palmetto and Chattahoochee Hills.
The Chiefs had permitted their own lives and families to be drawn dangerously close to an almost invisible killer over, and over again. As career firefighters they were conditioned to handle fires that sometimes turned into 1000 plus degree infernos or sort out emergency medical catastrophes involving major trauma that could wreck the mind, but always the danger passed quickly. This was different … and yet, it was the same.
Six weeks later, Argo and Brett’s phones rang again–it was Barasoain. He explained reinforcements were thinning at SPOC 1 and Fulton County needed additional test sites as the coronavirus was surging. Barasoain waited for either Chief to speak. Silence. Then, just as before, the two Chiefs began offering ideas.
Noon time that day saw the three together again, this time looking over Fulton’s Wolf Creek Amphitheater. At first, they stood in silence, then with a nod Argo said “Well, that about covers it,” and the three broke their huddle and started to work. This time, the Chiefs held an advantage, if there was one to be had against COVID-19.
I have worked with many Public Safety professionals over the years in many demanding situations, but I have never known two individuals to be more responsive, dedicated, and selfless than Fire Chief Henry Argo and Fire Chief Greg Brett. These two servants typify the leaders your foundation’s Leadership Award describes. There can be no other persons more deserving of this award. 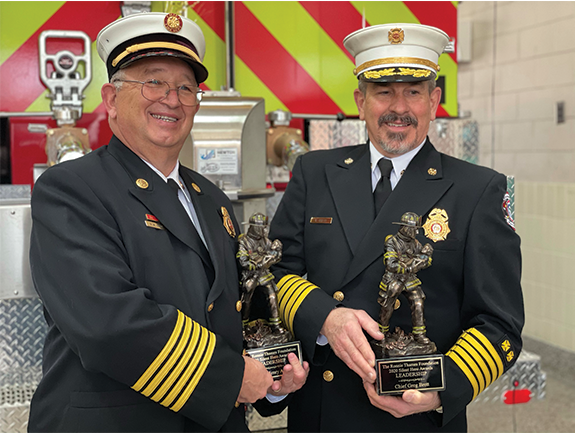